"Peter Sempels film on Lemmy made me wet my panties. Long live Motorhead!"
Cari Krome (The Runaways) after seeing the preview at Athology Film Archives in New York.

Support-Letter from "LEMMY : BÄSS & VOCALS : L.A. 10/28/2001
To whom it may concern: Some time ago, Peter Sempel asked me if he could do a documentary film on me. I said OK. Almost 3 years later, it is finished and he showed it to me in Oct. 2001. He's made a good job of it and in regard of his work I would be pleased to promote (interviews/limited personal appearances (my schedule with my band permitting) the finished product. He has my full support and admiration!Yours sincerely, LEMMY (aka I.F.Kilmister)"

BRANDNEW: LEMMY-poster: 4col., black+white and "orange-yellow" (Lemmy told me last week(at DOCKS,Hamburg): "The posters are good, best is the orange-yellow with one eye.") 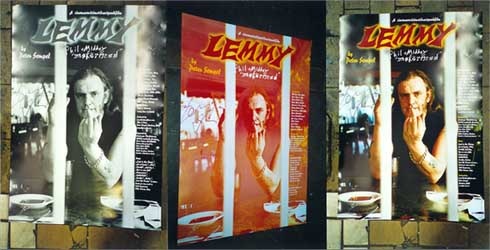 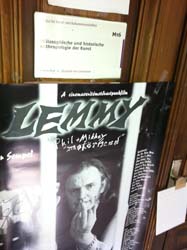 The LEMMY-film/video/DVD still hasn´t any distribution; as before i will have veryfew personalshows here+there (if I´m asked+have time) - But "at least" now I made a poster, in different colours (I told the printer, while the machine was working, to take some out after 2 colours(red/yellow)+blackwhite.)(I hope not too many order as I package etc myself...) -
and for the new year 2004 I wish you all, as Lemmy says: "HALS UND BEINBRUCH!"

update, 24.3.2003:
Although there are many fans who´d be pretty eager to get a LEMMY-video or DVD i still haven´t got a company to organise this (..till now it hasn´t been a question of money). (I don´t send any tapes away anymore(the ones i did send away, nearly all have the name of receiver or a special mark in picture, so i can track down pretty easily, where a possible pirate-copy would come from )- ohboy... lets hope we get it soon now!!! verybestregards!Longlivelemmyandmotörhead!!! peter Email: sempel@t-online.de or fax: ..49-40-31798100 or ...3193197

Review from a fan, L.A. 05/04/2002.:
The film was so fucking cool (2 hours !) It had a hilarious interview w/Ozzy who stated that if a nuclear bomb ever detonated, there would be 3 survivors: Rats, Keith Richards and Lemmy. He loves Lemmy a lot. Footage included live songs from everywhere, Rehearsal w/Brian May , Fast Eddie and Phil doing Overkill with a vicious solo by Brian May. I SWEAR THIS WAS THE MOST INCREDIBLE MOMENT I HAVE EVER SEEN MUSICALLY! I was numb. Lemmy was kicking the shit out of his bass and Mikkey was doing some serious double bass work. Footage of Lemmy in his WW 2 museum condo, Interviews w/Mikkey and Phil, Mikkey drum solo (YEEESSSSSS) and Phil getting his Mom & Dad tattoo. I met Mr. Semper and best of all... I got you some flyers and a bitchin postcard. Wish to god you would have been there. Even a little interview w/ Fast Eddie and Lemmy's son. 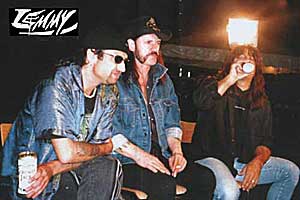 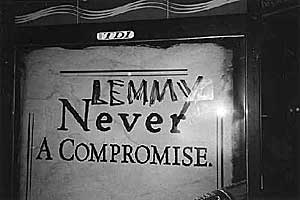 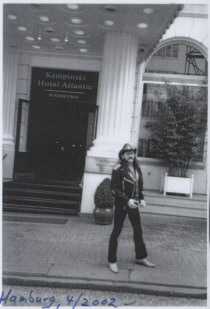 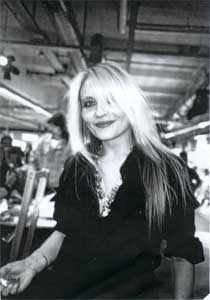 on 10.10.2001 after driving through the desert from Albuquerque to L.A.: sat on Lemmy´s sofa and we watched the final version of "LEMMY", 111min - it was very good (then drove directly back to wonderful Albuquerque).


3 new short interviews: with son of Lemm, Paul from London at the Rainbow and : this beautifulviciouslookingbitch named Corey (Nashville Pussy), just loveable!!! - and the expert Ace Trump. Then I showed Lemmy new version of the film, also with guest Brian May on "Overkill" - again he liked it a lot and suggested to get some sort of kick for the title - like f.ex. "LEMMY Out Of Here" (Corey-idea), or "LEMMY, the Singer" (Dieter Meier-idea) or, well... "LEMMY ..something" or " ..something.....LEMMY"

Since 11/98 filmed: 6 concerts (totally), several interviews with Lemmy, backstage, at studio - HE´S ACTUALLY SINGING ACAPELLA, YOU´LL NEVER FORGET THIS! - , in bars and in his apartment in L.A. (a real museum!), making very clear his ideas about "Third Reich", also recording a song at studio; stories from Mikkey Dee (also drumsolo at studio) and "goodmoody" Phil Campbell (how ya do it??) - both working together in studio for new song (record: 2000); Ozzy Osbourne (with his killerdogs), Derek Green (Sepultura), Nina C. Alice ("Skew Siskin"), Slim Jim (at his "Cat Club", Sunset Blvd.),with Skin (Skunk Anansie) London 12/99 (Dec.´99), Mario (Rainbow, L.A.), Todd, Uriz von Oertzen, Rainer and several friends and helpers,
some wonderful fans and surprises...
15. juli 2000: at Monsterrocknight: interview with DORO (she has beautiful blue eyes).
In 2000 I filmed at another 6 concerts, including soundchecks and "special moments"

This is a true independent film. Long Live LEMMY and MOTÖRHEAD !!! 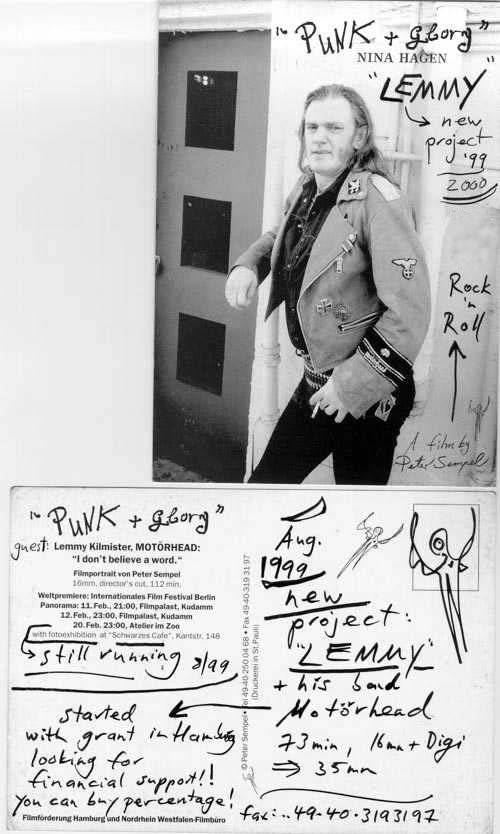